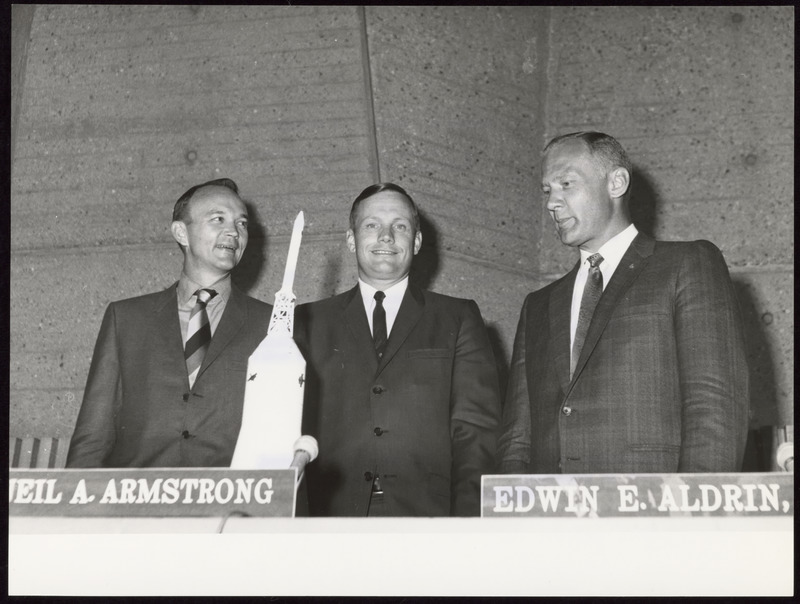 Click on the image to listen to the recording

“That’s one small step for (a) man, one giant leap for mankind” Neil Armstrong

Fifty years ago, on 16 July 1969, NASA launched the Apollo spacecraft with three men on board: Neil Armstrong, Buzz Aldrin and Michael Collins. After their Russian counterparts, Yuri Gagarin and Valentina Tereshkova, the Americans went a stage further by landing a man on the Moon and returning him safely to the Earth. This goal, initiated by President John F. Kennedy in 1961, was risky. At that time, NASA was a recently established government agency, which did not yet have the necessary technical equipment and had not even sent a man into orbit.

And yet, on 20 July 1969, the whole world watched the first steps of the man on the Moon live on television. Neil Armstrong, the only civilian in the crew, performed the feat of landing on the lunar surface. Neil Armstrong and Buzz Aldrin installed scientific instruments and collected samples for research. Michael Collins, the third member of the crew, was in the control module. Mission accomplished for the Americans! They returned to Earth a few days later as true heroes.

On 8 October 1969, less than three months after their feat, the three astronauts of the Apollo 11 mission were received at UNESCO for a press conference. Journalists from all over the world gathered to interview the crew members. Were the stars visible in the lunar sky? Did you see any UFOs? Did you feel anything other than man in space? So many questions answered live and frankly, by these three men who made their mark on world history.