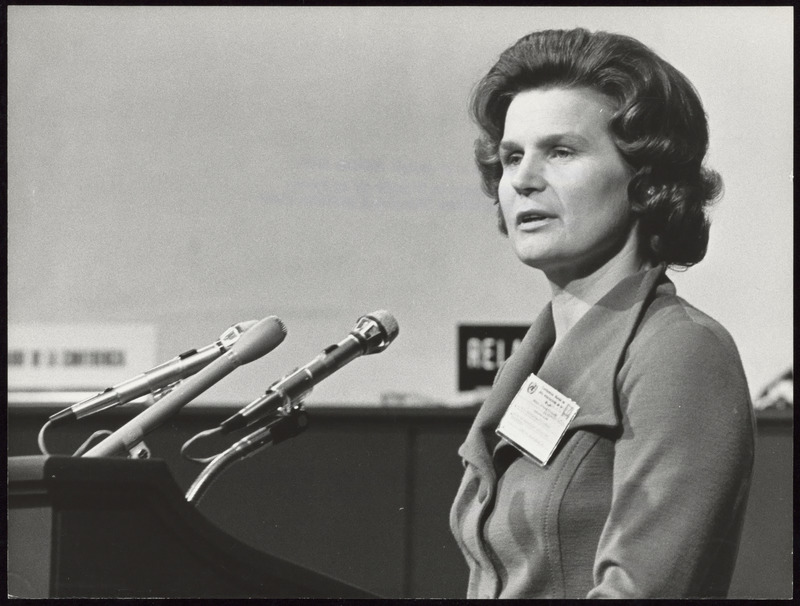 "Although we remained at altitudes infinitely lower than you, we have the feeling that thanks to you, we and the whole of humanity, we have found the road to the stars.” René Maheu, Director-General of UNESCO (1962-1974).

On 11 May 1966, Valentina Tereshkova was the guest of honour of UNESCO’s Executive Board. A special tribute was paid to this russian woman, who had just accomplished an unprecedented achievement. From a modest background, this young textile worker, parachutist, was a candidate to participate in the next space programme of the Soviet Union. Selected among 400 women, she became the youngest civilian cosmonaut in history.

After months of intensive training (including parachute jumping, heat resistance testing, zero-gravity flying, piloting), two years after her compatriot Yuri Gagarin in 1961 and just before Neil Armstrong's exploit in 1969, she made history, at the age of 26 by taking off alone on 16 June 1963 aboard Vostok 6. She made observations, kept a logbook, took pictures and even entered into communication with another cosmonaut who was a few kilometres away from her.

Today, Valentina Tereshkova is 82 years old. She is a member of the russian parliament. Following her journey into space, she became a trainer of new cosmonauts until 1997. Involved early on in politics, she has always faught to advance women’s rights in Russia. For her distinguished career, she has received the highest honours of her country: the Heroes Medal of the Soviet Union and the Pilot-Cosmonaut Medal of the USSR.

Valentina Tereshkova is undeniably one of those women who has left their mark on history. Thanks to her, several other women on an international level were also able to discover this sensational journey into space. A great scientific and social leap forward.