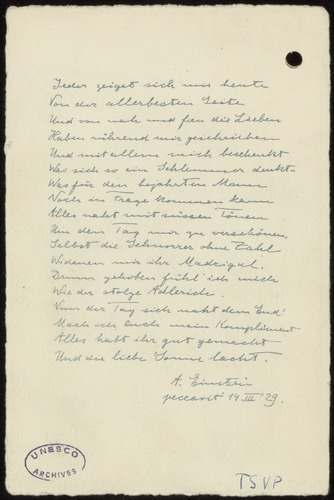 On the occasion of Albert Einstein's 140th birthday, on the 14th of March, and of World Poetry Day, on the 21st of March, we would like to share this poem from our Archives, hand-written by Einstein in response to the celebration of his 50th birthday by the other members of the IICI.

Albert Einstein (1879-1955) was among the first twelve members of the International Committee on Intellectual Cooperation (ICIC) when it was created in 1921. However, shocked about Rathenau’s assassination on 24 June 1922, he sought to withdraw from politics and asked to withdraw from the ICIC. At the suggestion of Henri Bergson, Hendrik Antoon Lorentz was chosen to replace Einstein. In June 1924 amidst the Ruhr crisis, Einstein rejoined the ICIC, and stayed until 1932. After Einstein left the ICIC in 1932, his deputy, Hugo Andres Krüß, replaced him and stayed until Germany’s withdrawal from the League of Nations. However, Einstein continued certain League of Nations activities. In 1933, for example, the International Institute of Intellectual Cooperation (IICI) published an exchange of letters between Einstein and Sigmund Freud, entitled “Why War?” In it, Einstein and Freud debated on whether humans have an instinct for war and Einstein defended the loss of national political sovereignty in favour of an international organisation in order to guarantee peace.

“Einstein's ambivalence to the Germans was equaled by their ambivalence to him, illustrated by the experience of his fiftieth birthday. On the one hand there was such international fame that he was driven to the refuge of Janos Plesch's house at Gatow by journalists who wanted a birthday interview. The German Chancellor described him as "Germany's great savant." The University of Paris conferred an honorary degree which he received later in the year, staying in the German embassy and meeting Briand with whom he discussed the need for Franco-German friendship. The Zionists announced that they were to plant an "Einstein wood" near Jerusalem. To the apartment in Haberlandstrasse there came presents from great men and small men alike - the first which Einstein acknowledged being an ounce of tobacco, sent by a German laborer with the apology that it was "a relatively small amount but gathered in a good field." To many friends he sent a mimeographed copy of his own doggerel verse, slipping it in the post without a covering letter”

Transcription of the poem:

English translation of the poem:

Everyone shows their best face today,
And from near and far have sweetly written,
Showering me with all things one could wish for
That still matter to an old man.
Everyone approaches with nice voices
In order to make a better day of it,
End even the innumerable spongers have paid their tribute.
And so I feel lifted up like a noble eagle.
Now the day nears its close and I send you my compliments.
Everything that you did was good, and the sun smiles.