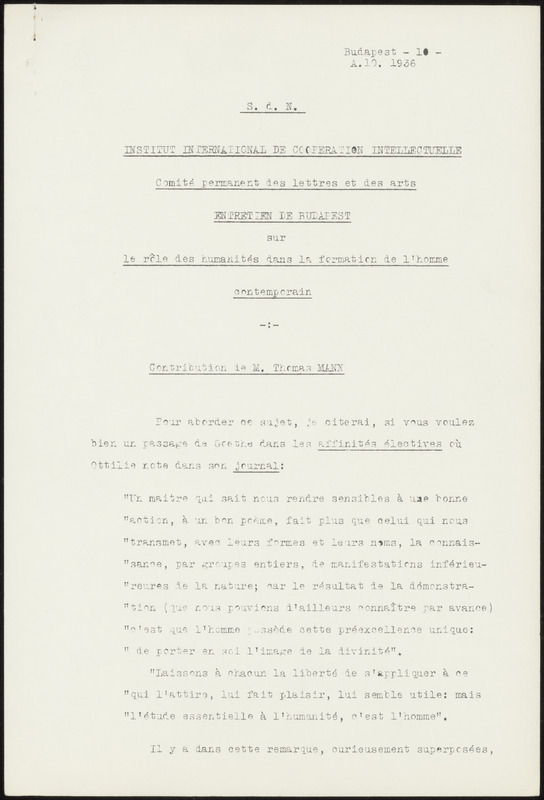 In June 1936, a congress was organized in Budapest, Hungary. The initiative came from Jozsef Balogh, distinguished Latinist and translator of Augustin's Confessions (translation published in 1943). The Budapest Congress brought together 28 intellectuals and reflected European tensions. The theme decided by the International Institute of Intellectual Cooperation was the "Role of Humanities in the Formation of Modern Man." The participants were tasked with defining Humanism and explaining its manifestation in the world, in scientific and technical culture. Finally, they were to sketch the outlines of a hypothetical modern humanism.

Thomas Mann, leading figure of European literature and winner of the Nobel Peace Prize in 1929, participated in the Budapest Congress. In 1931, he joined the Permanent Committe on Arts and Letters. From that time, Thomas Mann condemned the irrational acts of Germany influenced by the Nazis. He accused the Nazis of "radical nationalism," which promoted "a worship of nature radically hostile to Humanity." In 1933, the author definitively left Germany. In 1936, Mann was stripped of his German nationality.

Mann’ss intervention in Budapest was received as the profession of faith of a man faced with the difficulties of the times. It is rooted in the principle that the humanities form an integral part of our thought system. Thomas Mann wondered if it was always useful to look at the origins of our cultural heritage, and he responded postively, in particular regarding the Latin language. He believed that Roman civilization was the only one to be truly universal. He firmly rejected the opposition of science versusculture. He noted that the new generation is endowed with a curiosity for human existence and the fate of humanity. He predicted the birth of a new humanism deeply connected to human dignity.

Despite its beauty, the novelist’s intervention was received with some caution. "The author of Reflections of an Unpolitical Man gave a tragical aspect to the international meeting, during which he represented the pure Germanic race (...). His allocution was received, even for those who did not understand it, a respectful silence. Everyone could sense that it was a profession of faith, and when he said that he spoke on behalf of Christian Germany and Latin-Mediterranean civilization,the Commitee Members could not conceal their disappointment, thinking about the journalists who would repeat those undiplomatic words" (Zolnai, NRH, p. 456).

One year later, Thomas Mann wrote Achtung Europa (Essays 4), in which he claimed that if Europe abandoned its humanism, "then Humanism would perish, and Europe with it. Europe would be just a geographical and historical word. And all that would remain for us would be to find a refuge outside of space and time."