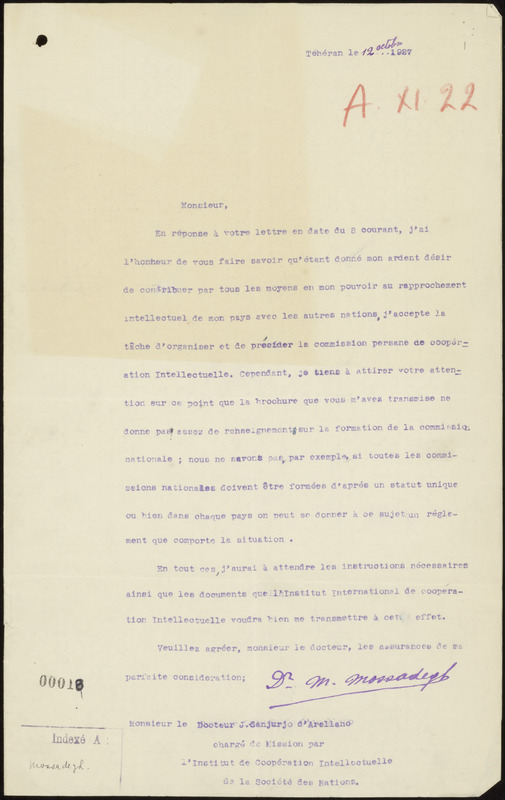 How did the UNESCO Archives come to hold a letter signed by the very hand of Mohammad Mossadegh, one of the most famous names in the history of contemporary Iran?

In October 1927, Dr. Sanjurjo d’Arellano, chargé de mission for the International Institute of Intellectual Cooperation, was sent on a fact-finding mission to Tehran by Julien Luchaire, Director of the IICI. D’Arellano’s task was to make contact with scientific, artistic, literary and educational institutions, as well as eminent intellectuals who could possibly organize and preside over a “Persian Commission for Intellectual Cooperation” for the Institute.  It appears one of those eminent personalities was no other than Dr. Mohammad Mossadegh (1882-1967), who went on to be elected Prime Minister of Iran between 1951 and 1953. During that short space of time, he nationalized the Iranian oil industry and was nominated Time Man of the Year for 1951, only to be overthrown by a coup d’état backed by the CIA and the UK.

Although the file does not contain further information about the endeavour, the letter (link below) shows that Mossadegh was most keen to take up the challenge and organize the commission to bring an intellectual rapprochement between Persia and other members of the international community.